Eggplant is a food that you probably either love or hate – for most people, there is no in between.

The early history of eggplant’s cultivation and use by humans is somewhat murky. The plant is believed to have originated in India where it grew (and still grows) wild, and there is some evidence that it was domesticated and grown there and in East Asia since before recorded history. The first known mention of the eggplant, however, only dates back to Chinese writings of the 3rd century B.C. Eggplant made its way through the Middle East to the Mediterranean in the early Middle Ages (mostly as a medicinal plant) and finally into Europe in about the 12th century. From there it spread throughout the world.

Today, over 50 million tons of eggplant (called aubergine in the UK and brinjal throughout Asia and Africa) is commercially cultivated worldwide with China (at about 32 million tons) accounting for well over half of that total. Other major producers include India, Turkey, Egypt, and Iran. Interestingly, although it is a very popular plant with gardeners and some varieties grow well throughout the US and Canada, less than one half of one percent (around 100,000 tons) of worldwide eggplant production is accounted for by the United States.

Normally characterized as a vegetable for culinary purposes, eggplant is actually a type of berry from a flowering vine in the Solanaceae family of plants. A nightshade plant, eggplant is related to tomatoes, bell peppers, and potatoes. The seeds and the skin, as well as the flesh of most eggplant, can be eaten. While it is most often consumed after being cooked, some eggplant can be eaten raw, although it may cause intestinal distress in some people due to it containing solemine – a mild toxin. It also has a quite bitter taste in its raw form. Nutritionally, on its own eggplant is an excellent source of dietary fiber and not much else.

Eggplant can range in color from a dark, almost black purple to pure white. Most common varieties will be egg-shaped (hence the name), have a relatively thick edible skin and a spongy white flesh. The seeds, while edible, have a bitter taste and are often removed before cooking. The thick flesh of most eggplant allows it to absorb oils and juices (and therefore flavors) well while cooking, accounting for its use in hundreds of dishes in dozens of cuisines around the world.

So, what are some of the most common types of eggplant?

Also sometimes called the American eggplant (for its popularity in the US) the Purple Globe is probably what comes to mind when you think of an eggplant, and what you will most often find in the produce section of your supermarket. First cultivated in Asia in the 14th century (and still primarily cultivated there), Purple Globes range from one to five pounds and will usually grow up to 10 inches in length and up to six inches in diameter. They are probably the most widely commercially cultivated eggplant in the world today.

The skin of the Purple Globe is (not surprisingly) a dark purple and usually very smooth, while the flesh is a creamy white with a somewhat firm, spongy texture and a slightly bitter taste after cooking. It is a very adaptable eggplant and is used in almost endless cooking applications throughout the world. It can be baked, roasted, broiled, pan-fried or grilled. A very ‘meaty’ eggplant, they are often used as a meat substitute in vegetarian pasta sauces and dishes, stir-fries, incorporated into meat or poultry-based stews and soups, and served as a vegetable with a variety of meat, chicken and baked fish dishes. They are also used in the production of meatless ‘veggie burgers’. 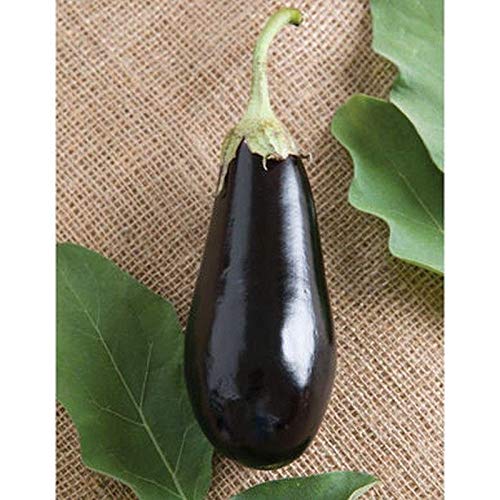 Italian eggplant is the name widely used throughout the United States and Europe for any one of about a dozen closely related eggplant cultivars popular for their use in Italian and Western European cuisines. Probably originating in India or China, they first arrived in Italy in the mid-9th century.

Resembling the Purple Globe in both shape and color, Italian eggplant varieties are smaller (usually about half to three-quarters the size) with a thinner skin and a slightly sweeter flavor. The flesh tends to be ivory in color and very porous, allowing these eggplants to easily soak up the often heavy oils and sauces used in Italian cooking. Italian eggplant is widely used in pasta dishes and sauces (both with and without meat), is often pickled, and is used as a main ingredient in the eponymous eggplant parmesan. Although this eggplant stands up to cooking well, it is fairly fragile in its natural raw state. It can normally only be stored at room temperature for about three days, and will suffer chill damage if refrigerated.

The Graffiti eggplant probably originated in Central India, and is today a favorite with home gardeners throughout the Western world due to its unique appearance. The skin of this aptly named eggplant will usually be either predominantly purple with white striping, or ivory with purple striping when raw (the striping will usually disappear during cooking). Normally about the same shape and size as its Italian cousin, the Graffiti has a creamy, less spongy ivory flesh that has a relatively sweet and fruity taste, making it one of the eggplant varieties that are sometimes eaten raw – particularly in parts of Europe and Asia. Their sweetness increases when cooked, making them good for use in vegetable medleys, as a standalone vegetable with richer meat (such as lamb and veal) based dishes, and are sometimes topped with melted cheese.

Indian eggplant (called Brinjal or Ratna) have been cultivated in their native India for hundreds – and quite probably thousands – of years. A small roundish oval eggplant rarely reaching over 3 inches, the Indian has a moderately thick, smooth dark red to purple skin and a crisp, firm white flesh. Normally only found at specialty markets outside of Asia, the Indian eggplant has a mild sweetness when cooked. They are often used in curry dishes, dipped in breadcrumbs and fried, and sometimes stuffed with herbs and rice. Because of their sweetness when cooked, they are often used to offset some of the stronger spices used in many Indian and Middle Eastern dishes. They are also sometimes grated, and used in traditional Ayurvedic medicine, particularly in the treatment of stomach ailments.

Originating in Eastern India and what is now Bangladesh, White eggplant has probably been cultivated in these and neighboring regions since before recorded history. Today there are dozens of cultivars of White eggplant widely grown throughout Asia; some of the more familiar cultivars to Western taste buds include the Albino, Japanese White, Ghost Buster, White Beauty, and Tango. Most cultivars will be between five and seven inches long, and an oblong shape that tapers towards the stem. White eggplant will have white or ivory-colored skin and a creamy white flesh that will usually have a less bitter taste than the purple varieties. The skin is often thicker and firmer on some varieties than purple eggplants, and will most often need to be peeled off and discarded before cooking. White eggplant is used in many of the same dishes as its purple relative, as well as in traditional Ayurvedic medicine, often to treat asthma symptoms.

The Thai is a small, cylindrical eggplant that is usually about the size of – or just a bit larger than – a golf ball. The thin skin can be varying shades of green, and is often mottled or streaked with white, while the flesh will usually be a creamy white with a relatively crunchy texture and a mild, slightly bitter flavor. Widely cultivated throughout China and Southeast Asia (particularly Thailand and Indonesia), the seeds tend to be quite bitter, and are often removed prior to cooking. The Thai is often used in soups, curries and stir fry dishes, and –unlike most eggplant – sometimes used raw in salads. Thai eggplant is not as durable as many other varieties, and will normally need to be used within a day or two of purchase. 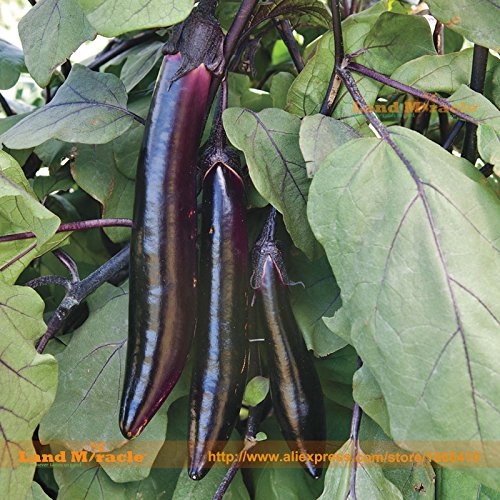 Also sometimes called the Japanese Long Purple, or just Long Purple, the Japanese Purple probably made its way to Japan (from whence it took its name) from China, and is today cultivated throughout the Far and Near East. An elongated (often up to ten inches) thin eggplant, it has a deep purple thin skin that sometimes ranges to black, and a mild, fairly sweet flavor. Very popular in soups, sir fry dishes, and stews throughout Asia, the Japanese Purple is also often grilled or pan fried and served as a side dish to meat, poultry, and some fish dishes. Known for having fewer seeds than many other varieties, they are also often pickled and consumed in this form as a snack.

A native of sub-Saharan Africa first introduced to Europe in the mid-14th century by Ottoman traders, the Garden Egg is a small white to yellowish eggplant with a thin, very tight skin and a mild, slightly bitter tasting flesh. Widely grown throughout Central and Northern Africa, Southeast Asia, Brazil, and parts of Europe, the Garden Egg has also recently enjoyed increasing popularity in the US, particularly as a garden vegetable. Used in many traditional African dishes, they are also often used in stir-fries, stews, soups and are sometimes grilled and served as part of a medley. In many parts of Africa, they are consumed raw.

Another eggplant of African origin and today most widely cultivated in parts of Asia, Turkey (for which it is named) and Brazil, the Turkish is a small round eggplant (normally about 3 inches) with an orange / red skin when fully ripe, and yellowish firm flesh. In most cases, Turkish eggplant is harvested while still a greenish color before they fully ripen, at which point the flesh is fairly sweet and quite tender. If left until they are orange, the flesh – and particularly the seeds – become quite bitter. When they are harvested young, Turkish eggplant (also called Gilo or Jilo in Brazil) are often used in stews and soups, and as a vegetable side dish. When mature, they are often hollowed out and stuffed with grains, ground meats or other vegetables and baked.

A fairly recent hybrid of the Thai eggplant, the Kermit (also known as the Kermit F-1 and reputed to have been named after Kermit the Frog of Muppet fame) was developed in the United States and is both commercially cultivated and grown in backyard gardens there. A very small, round eggplant usually about an inch in diameter, the Kermit’s skin is green and white and its flesh is crunchy with a mild flavor. The Kermit was developed to be used both raw and cooked, and is frequently used in green salads, battered or breaded and fried, and used in parmesan and marinara dishes.