While not a particularly important crop commercially or economically in most parts of the world (and certainly nowhere near as widely cultivated as bulb or ‘standard’ onions), green onions are grown on every continent with the exception of Antarctica, and are a favorite component of many and varied cuisines. They are most widely used in Asian and South American cooking applications, but through the centuries have found their way into most ethnic and cultural cuisines as both a vegetable and a garnish due to their mild, slightly sweet and earthy onion flavor.

The term ‘green onion’ is used to categorize several members of the Allium genus in the Amaryllidaceae family of flowering plants, most commonly Allium fistulosum. Generally speaking, most of what we call green onions are actually the shoots of young bulb onions that have not fully matured. In some cases, only the shoots are harvested, while in others both the shoot and small bulb are brought to market, as both parts are edible. In most cases, the green onions you find at the market will have small (or no) pale white bulbs and long green, or green and white, stalks.

Green onions are believed to have originated in Central Asia and while there is no way of determining exactly how long people have been cultivating them, the first reference to their use in cooking dates back over 2,000 years in China. Today, green onions are the principle onion used in Japanese cooking – particularly in stir fry and hot pot dishes – and are a component of literally hundreds of dishes in various Chinese cuisines. Green onions are also widely used in Mexican and South American cooking – particularly with fish, bean, and asado (grilled meat) dishes.

Green onions are an excellent source of vitamins A and C, as well as beta-carotene, calcium, manganese, and folate (vitamin B9). Along with their use as a vegetable and garnish in both Eastern and Western cooking, green onions have also been used for centuries in traditional Chinese medicine, where they are believed to relieve constipation, stomach distress, and some lung ailments.

So what are some of the different types of green onions?

Also sometimes called bunching onions, scallions are probably the most common type of green onion found on the planet today, and in some parts of the world – as well as some parts of the United States (mostly the East Coast) – is what all green onions are called. As a matter of fact, if you search the term ‘green onion’ on Wikipedia, you will be automatically redirected to scallions.

While not all scallions look the same, they have a number of things in common. Generally speaking, when you buy scallions at the market you will only get the stalks; the vast majority of scallion varieties produce no bulb at all. Although there are some differences in flavor between the different strains, virtually all scallions are milder, sweeter and earthier tasting than bulb onions. Some strains will produce stalks that are 2 feet or more in length, although the bunches you will most often find at the market in the US will usually be between 12 and 16 inches in length. The top of the stalks is almost universally a shade of green, while the lower portions can be varying shades of white, as well as other colors.

The Evergreen Long White Bunching is one of the more popular varieties of scallions in the world due in part to the plant’s excellent resistance to cold and fairly high yield. An heirloom variety that is believed to have been first grown in Asia, it has been cultivated throughout Europe and North America for centuries and is probably the variety of scallion you will find for sale most often at your local grocery store or farmers market.

A relatively fast growing onion (usually under 60 days from planting to harvest) the Evergreen Long White Bunching scallion does not produce a bulb. The thin stalks will usually grow to between 12 and 14 inches in length and be a dark green at the top, lightening in shade as it reaches the mostly pure white stem, which is the most flavorful part of the plant. A general rule of thumb is that the darker the part of the onion is, the milder the taste will be.

The Evergreen Long White Bunching (like most scallions) can be used raw or cooked and has a mild, slightly sweet, mild onion flavor. The greener portions of the scallion are used in a variety of salads, vegetable platters and as a garnish, while the entire onion is often used in the preparation of stir fry dishes, milder salsas, soups, and stews, curries, or minced and sprinkled over pasta, pizza, and casseroles. In most cases, these scallions will last between 4 and 6 days refrigerated. 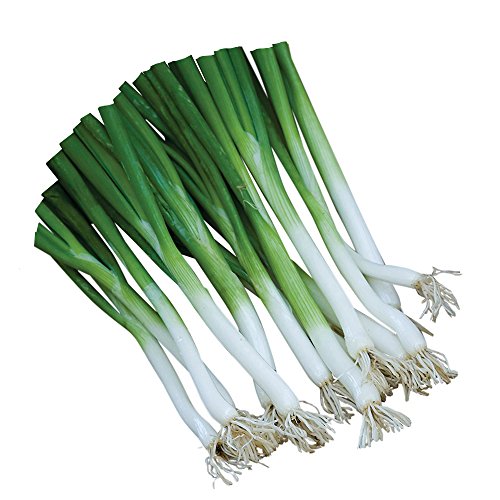 Another very popular scallion – particularly with home growers throughout North America – the Parade is an extremely hardy plant that will produce scallions from the early spring to the early winter. The Parade is known for its firm, upright stalks which will usually grow from 12 to 16 inches in height. Another ‘bulbless’ variety, the Parade scallion will tend to be thicker, firmer and provide a more uniform (and in many cases higher) yield than its Evergreen cousin.

The Parade will have dark, almost waxy green tops which taper down to their white to off-white stems. Their flavor will normally be slightly stronger and more pungent than the Evergreen, as well as slightly earthier. Used in the same way as other scallions, the Parade will remain quite crisp and firm after it is picked making it easier to both clean and chop. The Parade will generally last a bit longer than many other scallion varieties, often remaining good for over a week when refrigerated, although they will lose some of their crispness the older they get.

Also called the Tokyo Long White, Japanese Long, Shiro Negi and Japanese Bunching, the Tokyo Negi scallion is believed to be native to the Northwest part of China and Siberia, where there is evidence that it has been grown and used for thousands of years. Today it is mostly cultivated in Asia (and, as the names would indicated, specifically Japan), although since the end of the Second World War it has gained some popularity in Europe and the United States, where it is grown as a specialty crop in California and Hawaii.

Although it can grow to over 3 feet in height, the Tokyo Negi is usually harvested when it is between 12 and 16 inches tall. The upper part of the scallion will usually be light green and have a somewhat tough texture, while the bottom is usually white to cream-color and is crunchy, quite juicy, and firm. Tokyo Negi scallions have a pungent and sharp flavor when raw, although they will become quite sweet when cooked. It is widely used in Japanese and other Asian cuisines in stir fry dishes, soups, and hot-pot dishes, as a general ingredient in salads, and as a garnish

Also called the Red Tip and Red Bunching, the Red Beard scallion is another native of Asia although the strains most popularly found in the United States probably originated in Spain in the 17th or 18th century. Today, Red Beard scallions can be found in markets the world over, but are particularly popular in Japan, China, Vietnam, and Thailand. In the last few years they have become increasingly popular with gardeners in North America both because of their flavor, and the unique color they bring to the garden. They prefer colder weather and are considered a fall scallion.

Red Beard scallions will grow to between 24 and 27 inches tall. The top half (or in some cases a little more) of the plant will be deep green, while the bottom will usually be a shade of red (hence the name) or even purple. The green shoots will be hollow, crunchy and tender with a very mild flavor, while the red base is quite firm, juicy, and more pungent than the leaves. They can be used in the same way as other types of scallions.

Often confused with scallions, Spring Onions are a variety of green onions that actually produce small, identifiable bulbs that grow beneath the ground. Depending on what part of the world you happen to be in, the term Spring Onion might be used to refer to any cultivar of young onion that is harvested prematurely; however, what is most commonly called a Spring Onion in North America and Western Europe actually refers to a number of onion varieties that will only produce very small bulbs even when they are fully mature, and which are valued as much for their greens as they are for the bulbs. While the tops are almost universally green, the bulbs can range from white to yellow to red, depending on the variety.

Generally, the green shoots of Spring Onions will grow to about a foot high, be quite slender, and hollow. They will normally have a bitter, pungent flavor that will lessen somewhat when they are cooked. The bulbs will normally be firm, crisp and tender, and will have a sweeter, less pungent taste than the greens. Most Spring Onion bulbs have a far milder flavor than larger onion bulbs and much thinner skins. Spring onion shoots are often used in salads with more bitter types of lettuce, while the bulbs are used in much the same way as full-sized onion bulbs.

Although closely related to the green onion (they are actually a separate species – ampeloprasum – of the Allium genus of plants that most green onions (fistulosum) belong to, Leeks are technically not a member of the onion family, although they are quite closely related. As opposed to Central Asia, Leeks are native to the Middle East and Mediterranean region, where they have been cultivated for over 3,000 years. Like the Spring Onion, most varieties of Leeks form a small, often elongated bulb beneath the ground. Leek shoots can grow up to three feet high, but most often the Leeks you will find at the supermarket will be around a foot in length as in most cases the upper, leafy portions of the shoots can be quite tough and are generally not eaten. Most varieties will have a very mild onion-like flavor and a subtle sweetness. Leeks are a very popular vegetable throughout Europe, where they are used in various soups and stews, and as a complementary vegetable.

Another plant often confused with green onions, Chives are yet another member of the Allium genus of flowering plants (Allium schoenoprasum) that look and taste a lot like green onions, accounting for the confusion. Chives are the only member of the Allium genus that are native to both the Old and New worlds, having developed separately in each. Chives are classified as an herb as opposed to a vegetable, and will often be found growing near green onions in the wild. While there are many species of Chives throughout the world, the ones North Americans are most familiar with will usually grow to about a foot tall. Some species have flat shoots, while others will be circular and hollow, but all will usually be a dark green. Chives are most often used as a fresh garnish, as unlike green onions they will lose most of their flavor when cooked. Popular varieties of Chives with home gardeners include the Purly, Dolores, and Staro.